PLASTICINO S.r.l. is a prominent maker of PVC and ALUMINIUM railings and fencing. Our experience has allowed us to create and patent EKO Line® profiles offering outstanding aesthetic qualities and durability. Profiles made from extruded bars of rigid PVC, expanded PVC and an expanded PVC version with the addition of 30% Fiberglass: EKO Line PLUS®. METAL Line® extruded aluminium profiles, available painted and/or film-coated, for use with PVC structures reinforced with iron or galvanised steel profiles.

Plasticino railing profiles require no maintenance of any kind and are highly durable, maintaining their original properties.

Ecology is one of the pillars of Plasticino’s industrial growth. 10% of the polyvinyl chloride we use in extrusion of our balcony profiles is “regenerated” from recycled PVC.

Plasticino profiles are guaranteed for ten years against changes in colour and structural defects caused by atmospheric agents.

Expanded PVC profile with the
addition of 30% Fiberglass – film-coated

The colours listed are intended merely for reference purposes.
To view the actual colour, refer to the colour samples supplied by PLASTICINO s.r.l.

THE BENEFITS OF PVC BALCONIES AND FENCING

The history of PVC

In its pure form, it is a rigid material; its versatility for different applications is a result of the possibility of blending it with plasticisers such as phthalic acid esters, even in high quantities, making it flexible and easy to form, or with inorganic compounds. It is considered stable and safe for technological applications at ambient temperature, but extremely hazardous if burnt or heated to high temperatures using unsuitable equipment due to the presence of chlorine in the molecule, which could be released in the form of Hcl, permitting dioxin formation or release of the monomer.

(From Wikipedia, the free encyclopedia)

The history of extrusion

Extrusion is an industrial process of deforming plastic to produce items with a constant cross section (such as tubes, bars, profiles or sheets). It is used with metals (such as steel, aluminium, lead or copper), plastics (such as rubber and thermoplastic materials) and all materials with a high degree of plasticity. 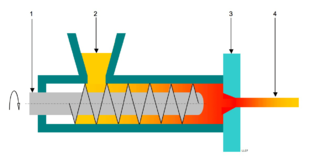 The earliest attempts at extrusion are recorded in the late nineteenth century, but not until the end of the second world war did development of thermoplastics such as polypropylene and polyethylene make these proceedings key technologies for use working with plastic materials.

(From Wikipedia, the free encyclopedia)